5 shoulder exercises you should do

Although the deltoids are not only among the muscles we use most during daily life (just think how the shoulders are involved in the movements of lifting, pushing or pulling), but also among those that allow us to improve our appearance more physical (making life appear thinner and giving us a stronger and safer appearance), often during the exercise session we neglect them and forget to train them.

Here are some of the exercises recommended by the experts of the American Council on Exercise (ACE) to effectively work the deltoids.

On your feet, with your legs spread at the same width as your shoulders, hold a dumbbell with each hand and position your arms so that your elbows and shoulders are at the same height, while your forearms point towards the ceiling here.

Keeping the abdomen and the back in a physiological position, slowly raise your arms upwards, and just before the elbows are fully relaxed, return to the starting position. Do three sessions of twelve repetitions each. 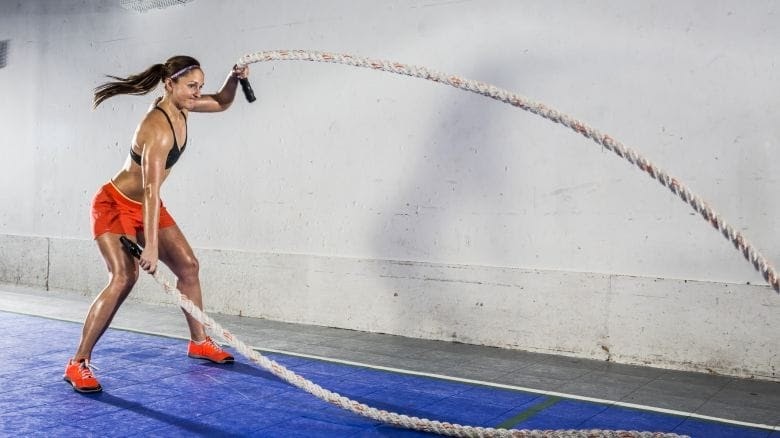 For this exercise, you will need two heavy ropes, anchored about five or six meters away from your body.

Standing in front of the ropes, hold each end with one hand, then raising and lowering your arms alternately, slam the ropes on the ground trying to create a wave as big as possible.

Start from the four-legged position, with your hands spread apart at the same width as your shoulders and facing slightly outward. The torso and head draw a straight line, while the gaze is turned downwards.

Then go down with the torso so as to bend the arms almost at right angles, then push on the arms to return to the starting position. Do the exercise for three sessions of fifteen repetitions.

Place your knee, tibia and left hand on the bench, making sure that your torso remains parallel to the floor as much as possible while respecting the physiological curves of your back. The right foot is instead on the ground, in contact with the ground.

With your right hand, hold the dumbbell (or bottle of water), then lift your right arm as if you were to take something in your pocket. Then return to your starting position and repeat the exercise for five sessions of ten repetitions, giving yourself one minute of rest between sessions.

Sitting with her torso flexed on her thighs or a little less, she holds two bottles of water and places it under her knees. Keeping your upper body still and your elbows slightly bent, raise your arms outwards being careful not to stiffen your neck, then with a controlled movement return to the starting position.

No widgets found. Go to Widget page and add the widget in Offcanvas Sidebar Widget Area.